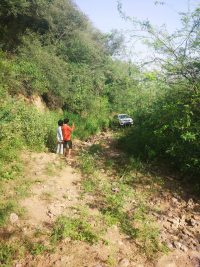 Trail Blazing #XXI was held at Chandigarh on Sunday July 07, 2019. There were two categories formed for the event – two wheel drive and four wheel drive vehicles.

Trail Blazing is a new concept on motoring and driving fun wherein the challenge is to find your own route. At the start each participant is given a map of about thirty ~ forty points spread all around.

The scoring and map guidance is done by “VirtualMarshal” app that runs on competitor’s smartphone and it automatically marks visit to clue points when you reach within 10~20 meters. Thus many points were created by organising team which were not on the road or the track but slightly away from it.

To reach people had to step out of their vehicles and walk or run to location while keeping a keen eye out on the map with marker point being displayed on app screen. See the picture where 2WD car crew are running in to bushes to get the clue visit marked in the app. The competitors have to decide which points to go for and then using onscreen maps work out the best route for them to take. It does sound easy but in practise it is difficult enough and very challenging.

To illustrate the point look at the map giving satellite view. The yellow line led to one point but before you can reach the second point there is a sandy stream bed to be crossed. It was not possible in 2 wheel drive vehicle and even in 4 wheel drives was not an easy task as the next picture shows. People in 2WD cars could get ut of their car and run to capture one point just after the sandy stream bed but other points were further away. See the car parked behind the jeep which is doing exactly that. The ideal path was green line so even though you lost one point on yellow line you could get three points and the going further even more as tarmac road led you back.

Easier points on the road or just off the tarmac roads were given lesser bonus marks and the most difficult one higher bonus marks. A temple on hill top was very interesting clue point. You had to park the car at the foot of the hill and then climb up to the temple to earn those bonus.

Not that going was any easier for 4WD vehicles. Points set for them were equally hard to reach but then 4WD drivers want always take their vehicle to location rather than walk or run. This led to people getting stuck or enjoying their 4WD prowess as is shown in these pictures.

The level of difficulty can be gauged from the fact that out of potential 60,000 points available the best finishers could achieve was 30,000. Most of the competitors could manage 15,000 or so in two hours allowed.

Apart from maximum time allowed, beyond which you got disqualified, competitor’s also could not exceed speed of 45 kmph and if they did speeding penalties were applied automatically by the VirtualMarshal app. This kept overall safety of participants in check and control. As soon as each participant reached the finish point VirtualMarshal app showed them their individual scores and winners were announced shortly after the last vehicle got in.