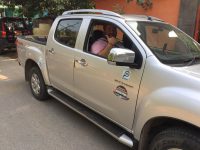 Sunday October 13, 2019 was a special day for Ghaziabad and eastern suburbs of Delhi. After a long gap some motorsport activity was planned. With 21 people turning up for the start it was a nice surprise. Planned as a familiarisation event for the Trail Blazing format the morning briefing for all participants was done in detail. A small walk-about setup was also done so that people could test the ClueRace app and be comfortable.

Sharp at nine’o clock the competitors were started off on a three hour “bag the points” hunt with points spread out all the way from Ghaziabad to banks of Yamuna touching Noida.

Post event all the winners received prizes in form of Monster Energy Drink cartons.  VirtualMarshal system was deployed to run the event.